My summer started with a focus on teamwork. I heard former General Stanley McChrystal interviewed in a podcast and was impressed with his “collaboration at work” thinking.

The quick roll-off-the-tongue former rank of the author makes his book sound like a military read. And I understand military learnings may be a little out of fashion these challenging days.

But this leader is just that – a leader – who has dealt with intense life and death situations and oversaw big change.

And I sensed he holds an enviable compassion for his people and much experience to share.

So in June, I picked up the former General’s book, Team of Teams: New Rules of Engagement for a Complex World, published in 2015.

It is actually how in the early 2000’s, an ol’ school organization (the very traditional US Military) raced to embrace collaboration and sharing information so they could compete in a new complex, and digitally networked world. I found it fascinating and very relevant for leaders dealing with the fast pace of change around us currently.

…greater than the simple sum of its parts

Large organizations have a big ship to turn if steaming ahead in one direction suddenly doesn’t work as well and a quick maneuver needs to happen. As a leader in a small company, I recognize our size enables us to be flexible and adaptable. Sometimes to a fault, but mostly to our advantage. Especially in a fast changing world. I like that about small and medium businesses.

Eight chapters in, McChrystal explains how they set up their airport bunker office to promote collaboration. This is a very popular topic these days – bring people together for a whole that is greater than the simple sum of its parts.

For inspiration, he drew on the example of Bell Labs. Way back in 1941, they hired a forward-thinking design firm to “design a campus whose spaces promoted interaction: to move from an office to a lab, for example, employees had to walk through the cafeteria where they would bump into people. The hope was that such casual interactions with peers, managers, and even custodial staff might prompt unexpected insights.”

He goes on to also use the example of former New York mayor Michael Bloomberg who turned down posh offices to work in a new large bullpen of low cubicles so people could work close to one another. “I issue proclamations telling everyone to work together,” said Bloomberg, “…but it’s the lack of walls that really makes them do it.”

…separating staff from each other lessens the magic collaboration can bring…

Often in an open office, privacy and quiet can become a concern. But separating staff from each other lessens the magic collaboration can bring. Smaller companies benefit from their lack of size often because collaborative environments are the norm… Private offices are a luxury of space they don’t have. They may feel this is a disadvantage not knowing additional space carved into convenient boxes may actually lessen their effectiveness and creative problem solving.

General McChrystal also makes a great case for sharing information across teams and out in the open. I really appreciated that encouragement. We are used to easy access to so much data at our fingertips. So secrecy doesn’t seem to work so well anymore.

Company leaders who promote sharing data across internal teams are leaning on the smarts of all their people and can watch as creative solutions and innovative people from different departments stand up to increase productivity and work quality and make the organization better.

“Team of Teams” was a great summer read on teamwork. Check it out!

Evaluate for a Successful 2020

It’s that time of year again!    2020 is here and with a new year comes pressure

The Phone Booth Reinvented for the Office

Sorry Superman… long gone are the days where we see phone booths on street corners.   Ironically, 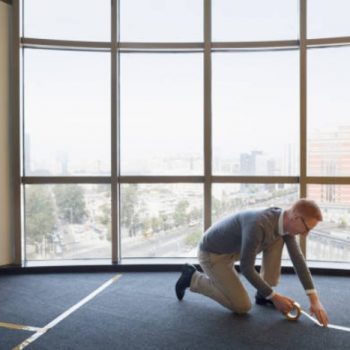 How to Measure an Office

Let’s make sure your next office measures up! More than ever, we are in a world with